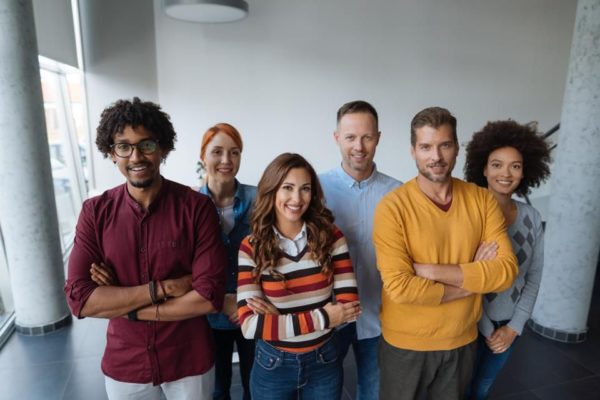 The words “diversity” and “inclusion” are so often joined that they are commonly treated as a single term. However, these words mean very different things. Diversity is easy to define as a measure of the distribution of personal characteristics within a group of people. Inclusion, on the other hand, is more difficult to define: while some formal studies have attempted to give a clear definition of inclusion, more often than not inclusion is defined in qualitative terms, such as the oft-quoted phrase by Vernā Myers that “diversity is being invited to the party; inclusion is being asked to dance.”

Part of the challenge in defining it, is that inclusion is largely invisible, as discussed for example in a recent study by Catalyst, which found that it is much easier to notice experiences of exclusion. This is a primary reason why white male leaders tend to be less aware of biases within their organizations, which perpetuates problems with inclusion as these leaders “lack a clear understanding of how big the problems are or where those problems lie.”

In my own work I have come to appreciate that inclusion is significantly more important than diversity. In fact, I have previously suggested that companies should stop focusing on diversity, and focus instead on inclusion.

As I continue to conduct academic research on diversity and inclusion, and as I work with corporate clients to help them define and quantify diversity, I keep finding more reasons for focusing on inclusion, and more reasons to reduce the focus on diversity. I thought it would be useful to provide readers with a list of specific reasons why I believe that the focus needs to shift away from diversity and toward inclusion.

1. Diversity forces people to be labeled

The very notion of diversity requires that each individual be assigned labels that specify characteristics such as race, gender, sexual orientation, age, and so on. This is a misguided notion because most traits, such as skin color and age, fall along a continuum. Furthermore, labeling can’t deal with increasingly common situations such as mixed-race individuals.

2. Diversity causes people to be bucketed

Labeling people in the name of diversity encourages people to be bucketed into broad categories, often lumping together people who have nothing in common. For instance, more than 400 million people around the world identify as Hispanic, but a diversity survey would put them all in the same bucket.

The act of labeling and bucketing people also encourages stereotyping. Many racist constructs rely on our brain’s tendency to create categories – leading to negative sentiments such as Islamophobia and anti-Semitism, to name a few.

By definition, diversity is an indicator of difference, and the word “diverse” has become – albeit semantically incorrectly – synonymous with “different,” as in the expression “a diverse individual.” Thus diversity emphasizes differences rather than highlighting commonalities, which leads to friction and discomfort, while decreasing the likelihood of inclusion.

5. Diversity is an outcome, not something that can be controlled directly

People talk about increasing diversity in a company by doing things like hiring more “diverse” candidates. However, this is misguided, because diversity should be the result of people from many different backgrounds choosing to work for the company. This, in turn, requires that the company create an inclusive environment where everyone has an equal chance to succeed.

6. We can’t tell how long it will take to increase diversity

Generalizing the previous point, diversity is an emergent outcome of a highly complex system, which means that it is extremely difficult to understand how any initiative will impact diversity or how long it will take to see change. Not surprisingly, companies across the U.S. are pouring billions of dollars into diversity programs, and yet in most cases the needle is hardly moving.

The focus on diversity gives the impression of a zero-sum game: if you hire more Black people, that means you must be taking jobs away from white people. This very common misconception leads even reasonable individuals to develop antagonistic feelings towards people who have been labeled and bucketed in the name of diversity.

8. Diversity leads to fatigue and backlash

Last, but certainly not least, the focus on diversity leads to fatigue and creates backlash. There is a growing number of stories about diversity fatigue, and in some cases outright diversity backlash, ranging from men who are afraid to be seen alone with female colleagues because of the #MeToo movement, to white and Asian employees suing Google for reverse discrimination.

Let’s focus on inclusion, not on diversity

These are some of the reasons why I think that the focus on diversity is misguided. Instead, we should emphasize the value and importance of inclusion, which would alleviate all of the problems associated with diversity, while actually driving companies toward greater diversity.

For one thing, focusing on similarities can decrease the discomfort and tension between people, and it can debunk stereotypes. This in itself can go a long way toward reducing biases in the workplace, making people from diverse backgrounds feel more included and engaged.

Inclusion is also easy to measure, and much easier to control than diversity: look for policies and procedures that create experiences of exclusion, and remove them. The impact will be much more direct, and the timeline much more predictable.

Furthermore, being inclusive is beneficial to everyone, and should be seen as a win-win situation: making someone feel more included is not going to detract from anyone else’s experience.

Finally, it is hard to imagine anyone complaining of “inclusion fatigue,” yearning for the good old days of feeling excluded. Similarly, it would be difficult for anyone to argue that they are being discriminated against on the grounds that their company is trying to make everyone feel included.

I firmly believe that any company that embraces inclusion will find itself naturally becoming more diverse, and at the same time it will enjoy happier employees, which in turn will yield greater productivity and an increase in overall company performance.

Investors and the ‘Pipeline Problem’

The need for intentionality